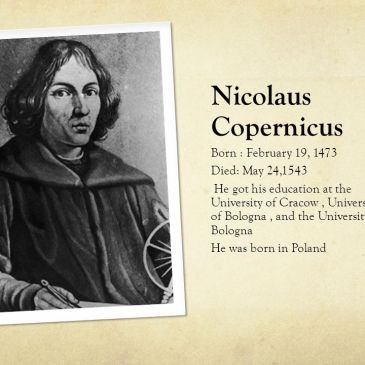 Nicholas Copernicus was the Polish astronomer who put forward the first mathematically based system of planets going around the sun. Copernicus referred sometimes to God in his works, and did not see his system as in conflict with the Bible. Brief History:  Copernicus was born in Torun, in eastern Poland, where his father was an … END_OF_DOCUMENT_TOKEN_TO_BE_REPLACED

Today was a beautiful day because I had a wonderful time with few of my Muslim friends. Our discussion was on the good news of Christianity. As you all know the good news of the Bible is the Cross of Christ. Without the cross, each of the other pillars of our faith becomes meaningless or … END_OF_DOCUMENT_TOKEN_TO_BE_REPLACED

When you switch on the TV or grab a Newspaper all that you would end up seeing or reading is about the depthness of evil that is evident in this Nation and around the world.  Why there is so much evil? Why people or nations dedicating their precious time in planning and conducting evil without … END_OF_DOCUMENT_TOKEN_TO_BE_REPLACED

The Koran teaches that Adam and Eve sinned in the garden, repented, and were forgiven. No mention is made of a sacrifice for sin. Muslims do not believe in original sin and do not believe people are sinful, but only weak. Since man is not a sinner there is no need of a Savior. The … END_OF_DOCUMENT_TOKEN_TO_BE_REPLACED